The Hawthorne Caballeros are thrilled to announce their brass staff for the 2019 season!

Joshua (JJ) Jenkins has his BA in Music Education from Ithaca College where he studied French Horn with Professor Alexander Shuhan. During his time at Ithaca College, he played in many of the school’s ensembles including the Symphony Orchestra and Wind Ensemble. Currently, Joshua is a band director in the Vernon Township School District in Vernon, NJ, where he conducts the 6th and 7th-grade band as well as teaches brass and percussion lessons grades 6-12. JJ is the assistant marching band director for the Vernon Township Viking Marching band and he conducts the Glen Meadow Middle School Jazz Band.

No stranger to drum corps, JJ has been a member of the Hawthorne Caballeros from 2008-2017. During his time at the Caballeros, he marched mellophone, held the position of head drum major, was the mellophone technician in 2015, and Assistant Brass Caption Head in 2018. His other drum corps experience includes being a marching member of the Carolina Crown in 2013 and 2014. During his time with Crown, he was the recipient of the 27th Lancers Foundation Scholarship and was a member of 2013 DCI World Champion corps. JJ looks forward to bring all of his skills and all he has learned to the further grow the brass program at the Caballeros!

Kyle Risch, Conductor, is in his third year as Band Director at West Chester East High School in West Chester, Pennsylvania. His responsibilities include direction of the Honors Wind Ensemble, Concert Band, Jazz Ensemble, Lab Jazz Band, and the West Chester East Marching Band. In his time the membership of East Bands has grown by nearly 50%.

Kyle is a graduate of West Chester University, receiving his Bachelors of Music Education degree in 2013 and his Master’s Degree in Wind Conducting in 2018. During his studies at WCU he has been fortunate to play in the university’s premier ensembles including the Wind Ensemble under the direction of Dr. Andrew Yozviak and the Criterions Jazz Ensemble lead by Dr. Marc Jacoby.

Upon completion of his undergraduate degree, Kyle started his career as one of two band directors in the Parsippany Troy Hills School District. Here he directed the Concert Band at the district’s two high schools and taught lessons to the brass and percussion studios. In addition, he also directed the Parsippany Hills High School Marching Band and arranged their 2014 show entitled “Lenny” featuring the music of Leonard Bernstein.

Jarrod Briley is a performer and educator from Beaufort, North Carolina who began playing the tuba at age 15. He recently graduated from East Carolina University with a BM in Tuba Performance where he studied under Tom McCaslin, Joanna Hersey, and Jarrod Williams. During this time, he spent two summers at the prestigious Eastern Music Festival in Greensboro, North Carolina. Jarrod marched with the Carolina Crown Drum and Bugle Corps in the summers of 2014 and 2015, earning a silver medal placement in the 2015 season. He was also very active in the marching arts during his college career, being a member of the East Carolina Marching Pirates for 3 years and serving as drum major for one year. Jarrod is currently pursuing an Advanced Performance Studies Certificate in Tuba Performance at the Bard College Conservatory of Music in Annandale-on-Hudson, New York, as well as maintaining an active freelance performing career in the greater Hudson Valley.

Kirsten Raschdorf is currently an instrumental music teacher in the Parsippany-Troy Hills School District, where she teachesfourth and fifth-grade band in two different elementary schools. Kirsten graduated with a Master of Music in horn performance from the University of Southern California, and a Bachelor of Fine Arts with a horn concentration from Carnegie Mellon University. Before beginning her teaching career in New Jersey, Kirsten freelanced in the Los Angeles area, as well as in the Pittsburgh, West Virginia, and New Jersey areas. One of her most memorable and cherished experiences was playing with the horn section of the Thornton Symphony Orchestra in Los Angles with Yo-Yo Ma as the featured soloist of the ensemble.

Kirsten began her drum corps career as a mellophone player with The Jersey Surf for four seasons, from 1996-1999, where she learned the fundamentals of brass playing that she still relies on to this day. 15 years later, she came back to drum corps as a mellophone section member with the Hawthorne Caballeros for the 2014, 2016, and 2017 seasons, for which she was the mellophone and French horn soloist in ’16 and ’17. In 2016, she was awarded the Caballeros Brass Player of the Year. in 2018, Kirsten was a member of the brass staff serving as the mellophone technician. Kirsten is currently a music and visual tech for Parsippany High School, as well as Ramsey High School. 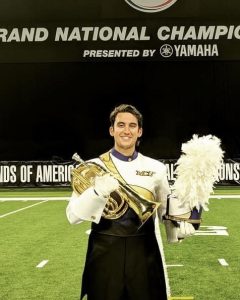 Alex has performed with the West Chester University Wind Symphony for 2 years, basketball band for 2 years, and has spent 4 years playing in the Incomparable Golden Ram Marching Band on Baritone, 2 of which as section leader. Alex has 2 years of Drum Corps experience with the Reading Buccaneers Drum and Bugle Corps (’17 ’18). Alex has also spent this past fall as the brass music instructor for the West Chester East High School Marching Band.

Want to learn from these fine educators? There’s still time to sign up for the 2019 Open House on November 24th and 25th! Register online here or contact Mike Ryan at m.ryan@cabs.org for more information. We hope to see you there!

Contibute to the Caballeros 750 for 75th Campaign